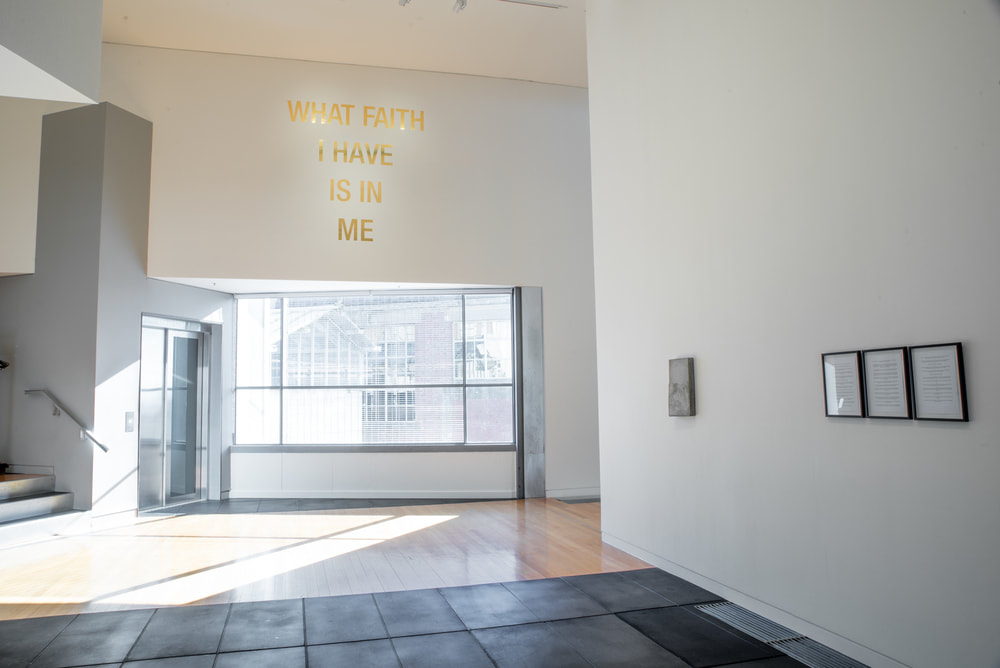 What Faith I Have 2012/2017.
The artwork picks up on Oscar Wilde’s notion–developed while he was in Reading Gaol–of a ‘confraternity of the faithless’ or an order for those who cannot believe. It explores the idea of overwhelming ethical demands or ‘truths’ that are internally generated and have the potential to propel people to act in the world from a place other than self-interest. In tension with alternative meanings, such as a reference to hubris or narcissism, the work opens up to interpretation.

The Tomorrow People was an exercise in future-oriented thinking. The exhibition brought together a selection of works from an emerging generation of artists that offer urgent, resourceful and playful possibilities for navigating troubling times.
The Tomorrow People emerged from a set of provocations around politics and creative practice in the present. Rather than attempting to offer answers, the show and its accompanying public programme invited open-ended discussion around the potentials and limitations of artmaking today.
These questions included: how have three decades of neoliberal policy, financialised capitalism, and global economic crises shaped our horizons of possibility for individual and collective living in Aotearoa New Zealand? If the once utopian possibilities of the Internet now seem worn, what potential remains within our thoroughly networked present for the articulation, undermining and imagining of identities, the forging of new bonds, and the building of spaces of care, social justice and emergence? Can art provide a site for solidarity, world-making, and refuge in an increasingly volatile contemporary moment? And if so, who gets a stake in the creation and maintenance of this site, and how do we extend the invitation of art to those who have otherwise been ignored, belittled, and kept at the periphery?
The title of the exhibition was borrowed from the 1973 Thames Television series: ‘The Tomorrow People’. In the show, a group of adolescents find themselves endowed with special powers, including teleportation, telekinesis and telepathy. These teenagers represent the supposedly next stage of human evolution, and are, throughout the series, tasked with overcoming evil forces for the good of humanity. Though ‘low-budget’ in every sense, this coming-of-age tale provides a tentative framework for thinking through how a generation of artists who have inherited a fractured, often overwhelming world, might be especially well-disposed to use these very conditions to arrive at better futures, even if, as the programme clearly revealed, they only have the present as the ground for imaginative projection.
Together with the artists included in the exhibition, the show brought new voices to bear, with new writing by Eloise Callister-Baker, Casey Carsel, Matilda Fraser, James Hope, Ellie Lee-Duncan, Dilohana Lekamge, Francis McWhannell, Robyn Maree Pickens, Hugo Robinson, Hanahiva Rose, Kari Schmidt, and Balamohan Shingade, published to accompany the works and a lively public programme which featured three forums designed to expand on the questions raised by the exhibition.

​A review of the exhibition by Chloe Geoghegan, titled Murmurings and Millennials: A Review of the
Tomorrow People can be found here: http://pantograph-punch.com/post/review-tomorrow-people