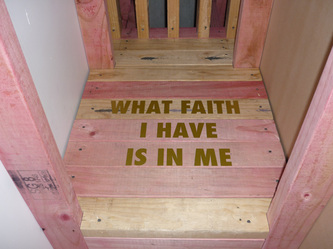 Image: What Faith I Have 2012, 2012, vinyl cut text installed at top platform of staircase constructed in the gallery space (a pulpit of sorts)
The artwork picks up on Oscar Wilde’s notion–developed while he was in Reading Gaol–of a ‘confraternity of the faithless’ or an order for those who cannot believe. It explores the idea of overwhelming ethical demands or ‘truths’ that are internally generated and have the potential to propel people to act in the world from a place other than self-interest. In tension with alternative meanings, such as a reference to hubris or narcissism, the work opens up to interpretation.
Speakeasy
“who has the right, the duty, and the courage to speak the truth?”

Michel Foucault, in his series of six lectures entitled ʻDiscourse and Truthʼ given at the University of California at Berkeley in the Fall Term of 1983, set out to deal with the “problem of the truth-teller or of truth-telling as an activity.” He framed this through a historical analysis of the concept of parrhesia in ancient Grecian politics, theatre and philosophy.

Foucault translated parrhesia both as its common English equivalent - free speech, and its etymological root - to say everything. However, Foucault specifies that parrhesia is not simply the right to speak, but a particular quality of speaking, in which the individual speaks in spite of the risk to self and with a sincerity that is evident to the listener.

He linked it to the essential right of the citizen to speak critically and take a stand towards the city, the laws, political institutions, and so on. He also emphasised the philosophical enquiry after certain truths about the world, nature, the city, behaviour and man. Finally, he argued that the exploration of an “ethics and aesthetics of the self” involved the joining of practice and theory, in effect asking how an individual lives the values and ideas they espouse.

Through the seminar series Foucault posed a series of questions including: who is able to speak freely and fearlessly? About what topics is it important to speak? From what moral, ethical or spiritual position does one speak? What are the consequences of speaking frankly? How does this relate to the exercise of power?
Reference: Michel Foucault, Fearless Speech, ed. Joseph Pearson, six lectures entitled ʻDiscourse and Truthʼ given at the University of California at Berkeley in the Fall Term of 1983 (Los Angeles: Semiotext(e), 2001).
https://stpaulst.aut.ac.nz/exhibitions/past-exhibitions/2012/assembly