‘You should try to figure out something productive to do during downtime even if it is not all that profitable’
businessdictionary.com

As the global economy appears as either runaway or perpetually on the cusp of imminent free fall, Franco Bifo Berardi encouragingly suggests that its collapse heralds the birth of the soul. So what if we did do something ‘profitable’ while the machine is idle, management is distracted and the smell of decay is in the air? Perhaps begin a kind of reconfiguration.
Through a playful exploration of ‘down time’ the subversive possibilities of the workplace as a site of affect and contradiction are put to work. 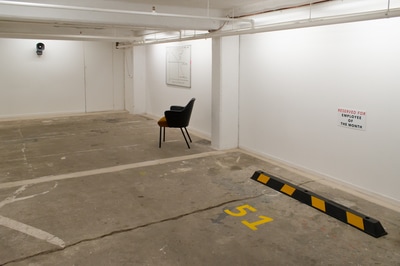 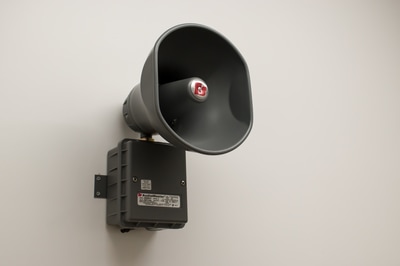 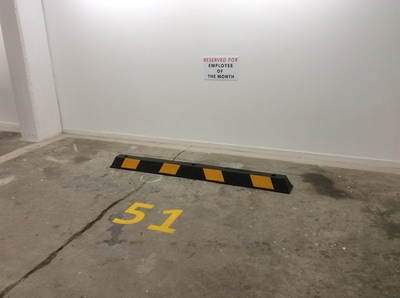 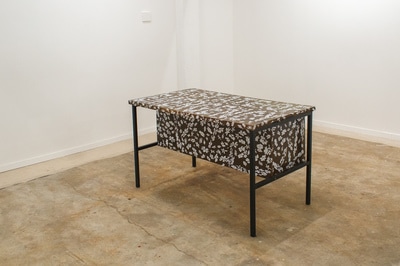 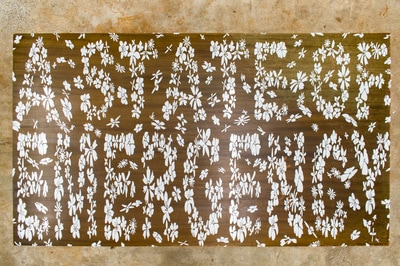 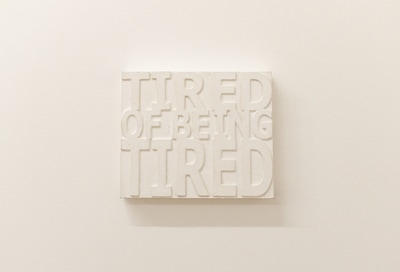 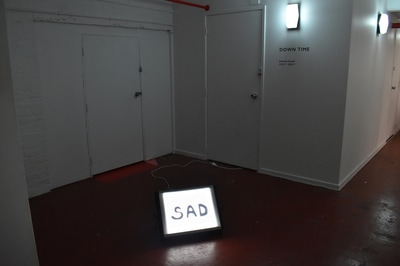 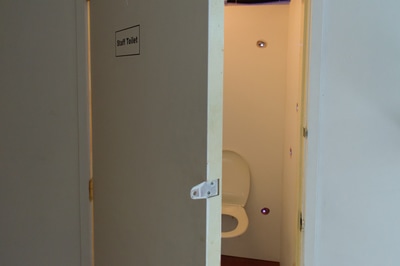 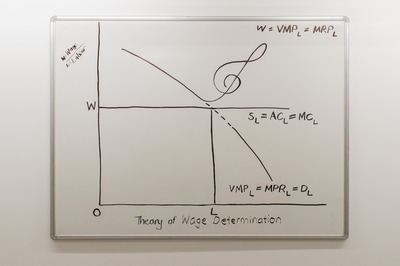 List of Works
Chorus, mono speaker, audio (looped)
in which the artist sings an old folk song titled On Mondays. Played through a repurposed warehouse internal address speaker–intended for announcements from management–the work oscillates between a protest song, a musing on indolence and a playful reflection on the concept of a
post-work society.

Employee of the Month
rubber vehicle stop, construction spray paint, corflute, vinyl text
The work is a wry comment on the idea that staff morale might increase through pitching employees against one another for the dubious and fleeting reward of Employee of the Month. The number 51, painted in the parking space links the work back to the 1951 Waterfront Workers Dispute when workers were pitched against one another in a more serious event.​

A State of Emergency III
desk, white adhesive vinyl (floral text and flowers)
Playing with the ideas behind ‘casual Friday’ and themed-based days at the office, the artist has decorated an old office desk with flowers. Inserted into the decoration is text that reads A State of Emergency. Playing with the dual meaning of emergency – a serious situation requiring immediate action and the process of something coming into existence the work calls the unfulfilled aspirations of the 1951 Waterfront Strike (when a state of emergency was declared) into the present day, suggesting that a time for radical questioning.

Working Through
wood block, cardboard, acrylic paint
The 8 hour day has been relegated to nostalgic regard, let alone any notion of moving to a reduced working day. This work engages empathetically with any exhaustion experienced by the viewer in order to stimulate critique of neo-liberalism’s demand that we all subscribe to a ‘good work ethic’.

S.A.D.
full spectrum (daylight) light-box, text
Full spectrum lights, or daylight lights as they are also know are promoted as increasing productivity and alleviating Seasonal Affective Disorder, the work is a playful comment on the very idea that we might deny people sunlight during the working day and then attempt to simulate it in order to increase output.

Rest Room
mdf, toilet seat, printed eyes, led lights
Recently the National led government took away the automatic right to a 10-minute tea break in the working day. This erosion of a hard won entitlement goes hand in hand with increased surveillance of workers, for example – screen-time, locator apps, social media. Can something as private and necessary as time spent in the lavatory also fall to this surveillance culture?

Counterpoint, whiteboard, marker pen
The artist has reworked a productivity diagramme in order to highlight the correlation between high number of workers and wage suppression. The original diagramme simply showed that the fewer workers there are the higher the wages, with wages then decreasing in relation to availability of labour. By sending the line ‘off scale’ through the introduction of a musical clef sign, the artist is suggesting a break from the formula to a more joyful state where everyone receives a decent income.

​A review of the exhibition by Hugo Robinson titled, DOWN TIME: Labour politics, subjectivity and counter-production, can be found here:
http://enjoy.org.nz/blog/2017/07/down-time-labour-politics-subjectivity-and-counter